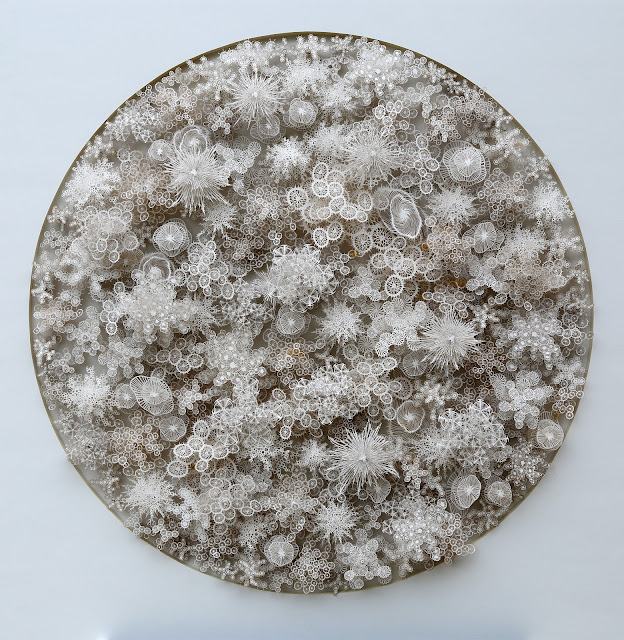 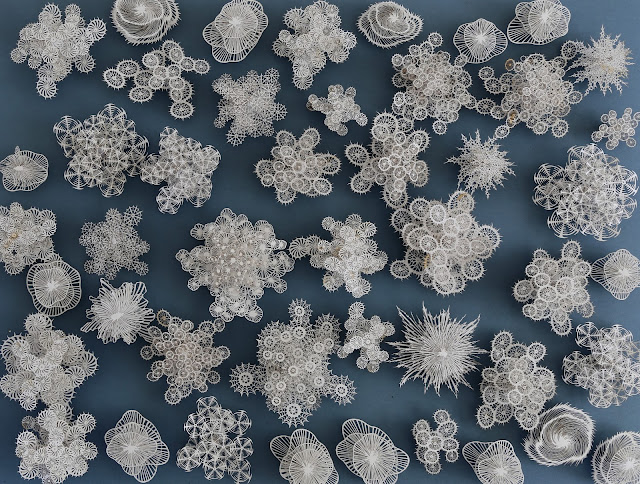 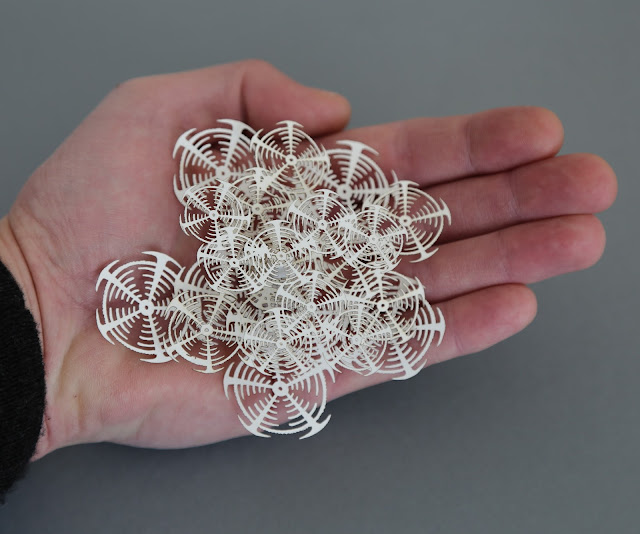 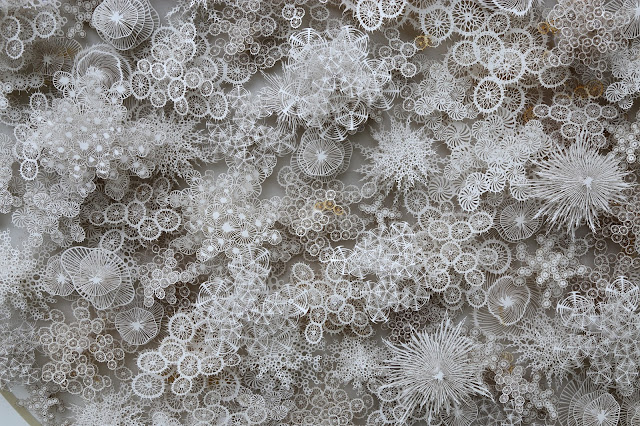 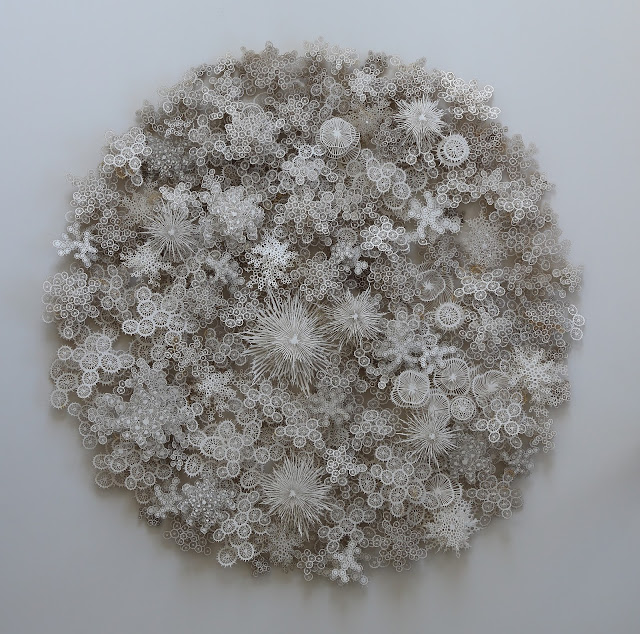 The circle here evokes on the one hand a petri dish and on the other a mandala, two disparate references fused by the process of art. The motifs inside the circle reference coral, moss, bacteria, mold, radiolaria....Ultimately the sculpture is a work of pure imagination that transcends a simple mimetic reading but which reminds us nonetheless of nature's fragility and beautiful intricacy. 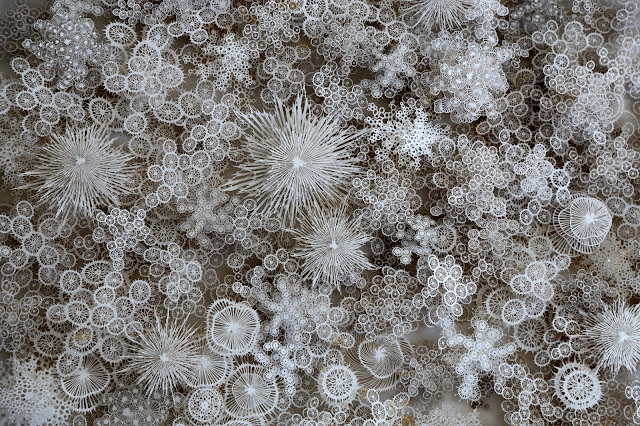 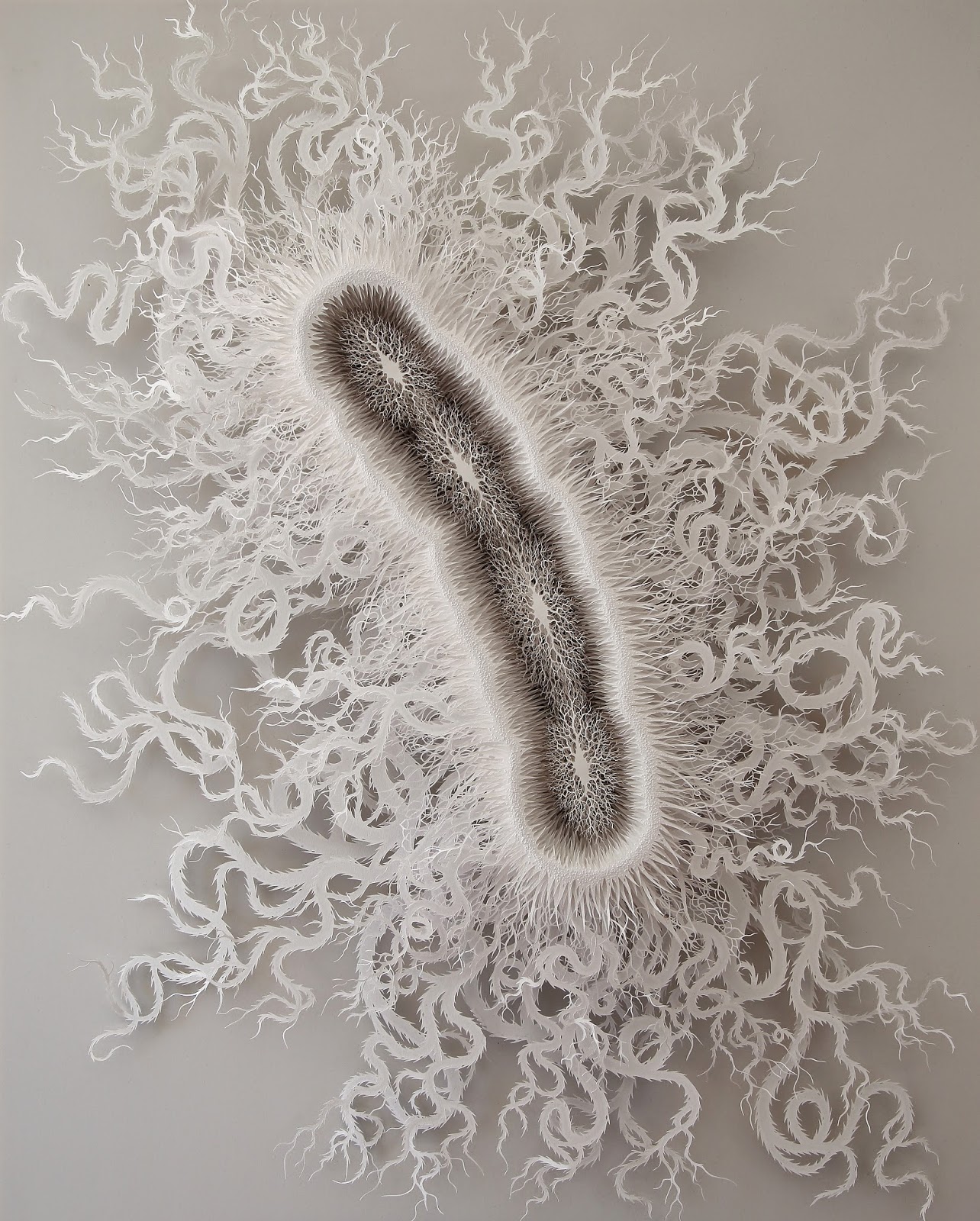 "Cut Microbe" (44x35x8inches/112x90x20cms) This piece is completely handcut from 10 sheets of paper. It was commissioned by the Eden Project UK (www.edenproject.com) to be part of an exhibition entitled "The Invisible You" which explores the Human Biome, that is the vast colony of bacteria that inhabits our body. 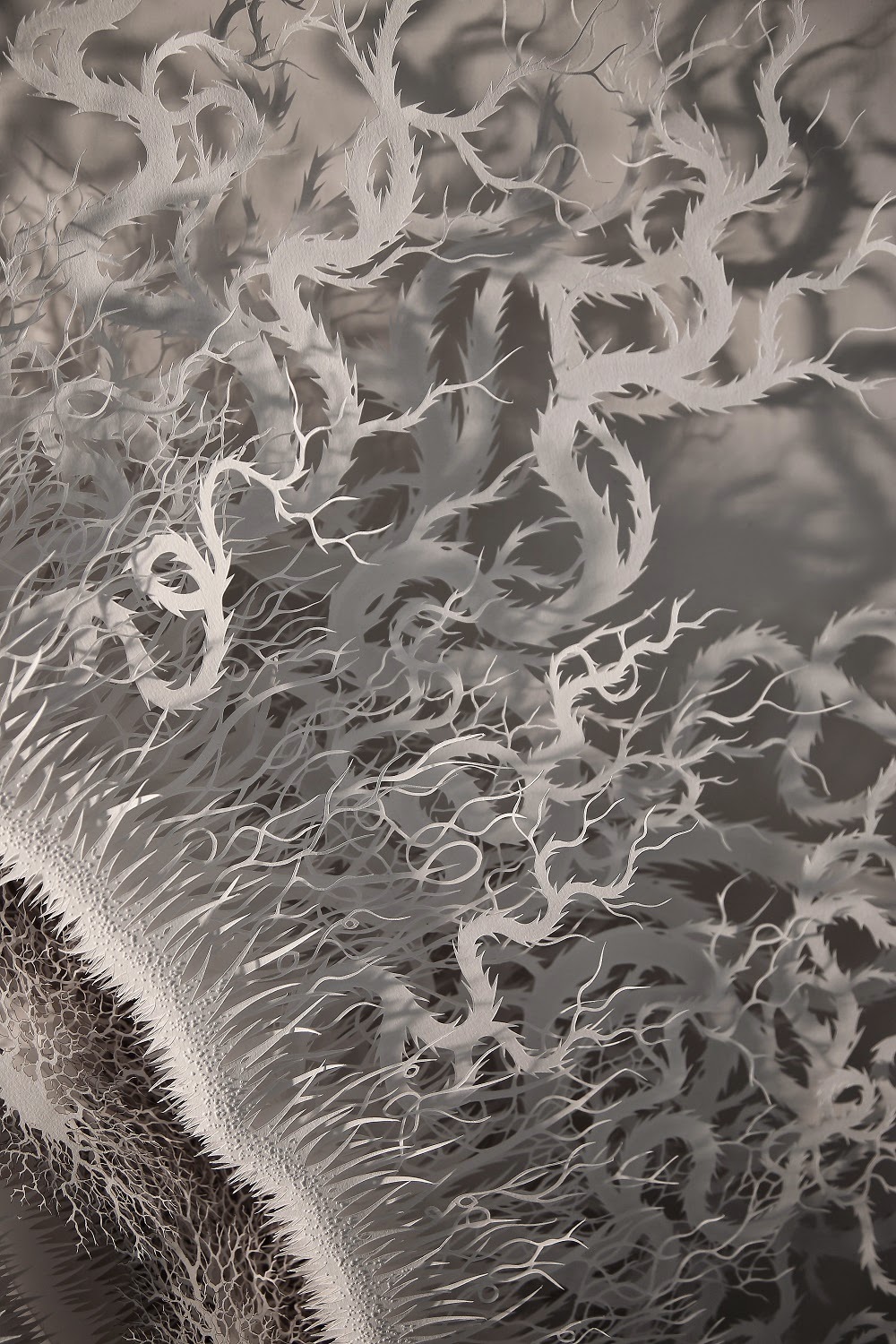 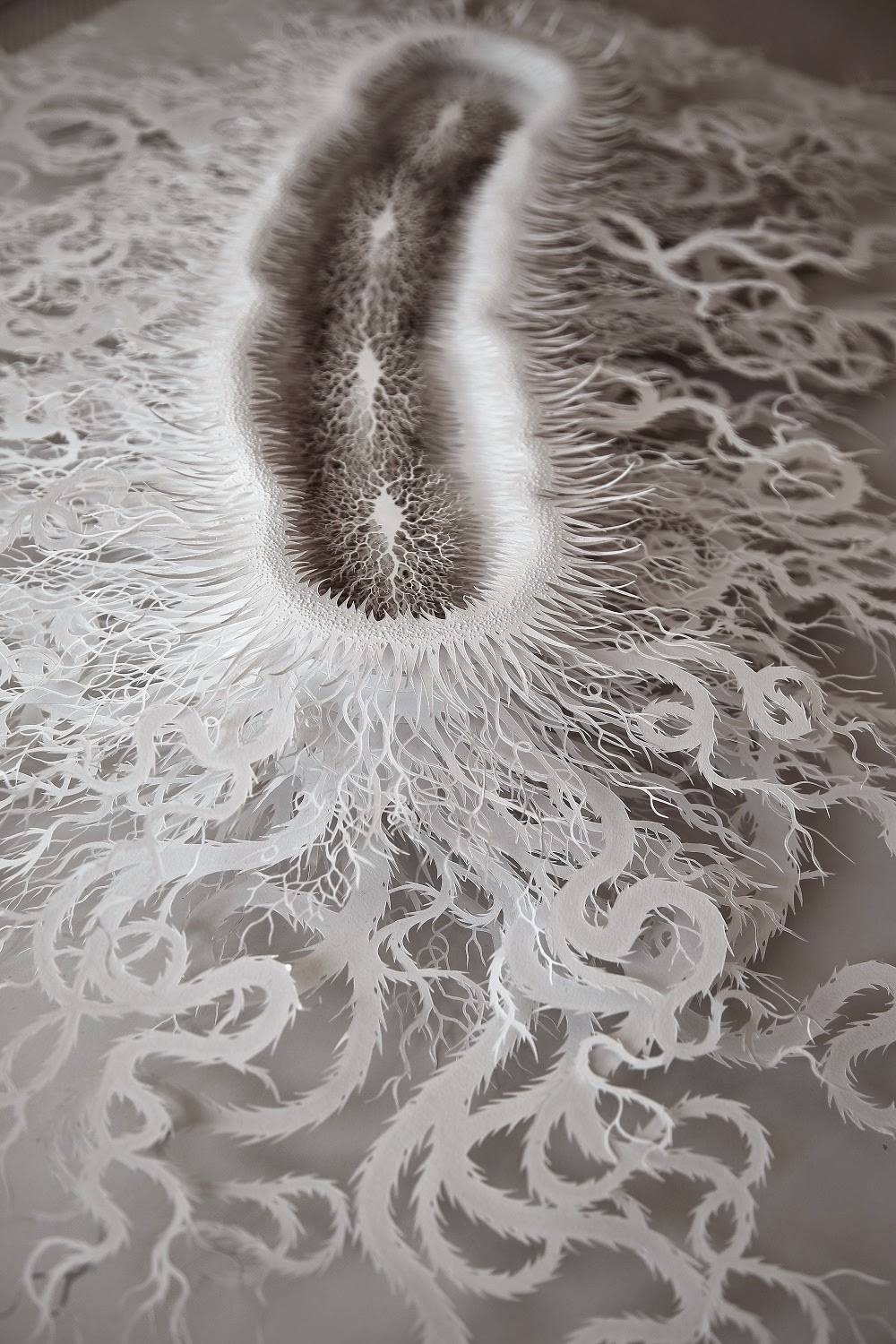 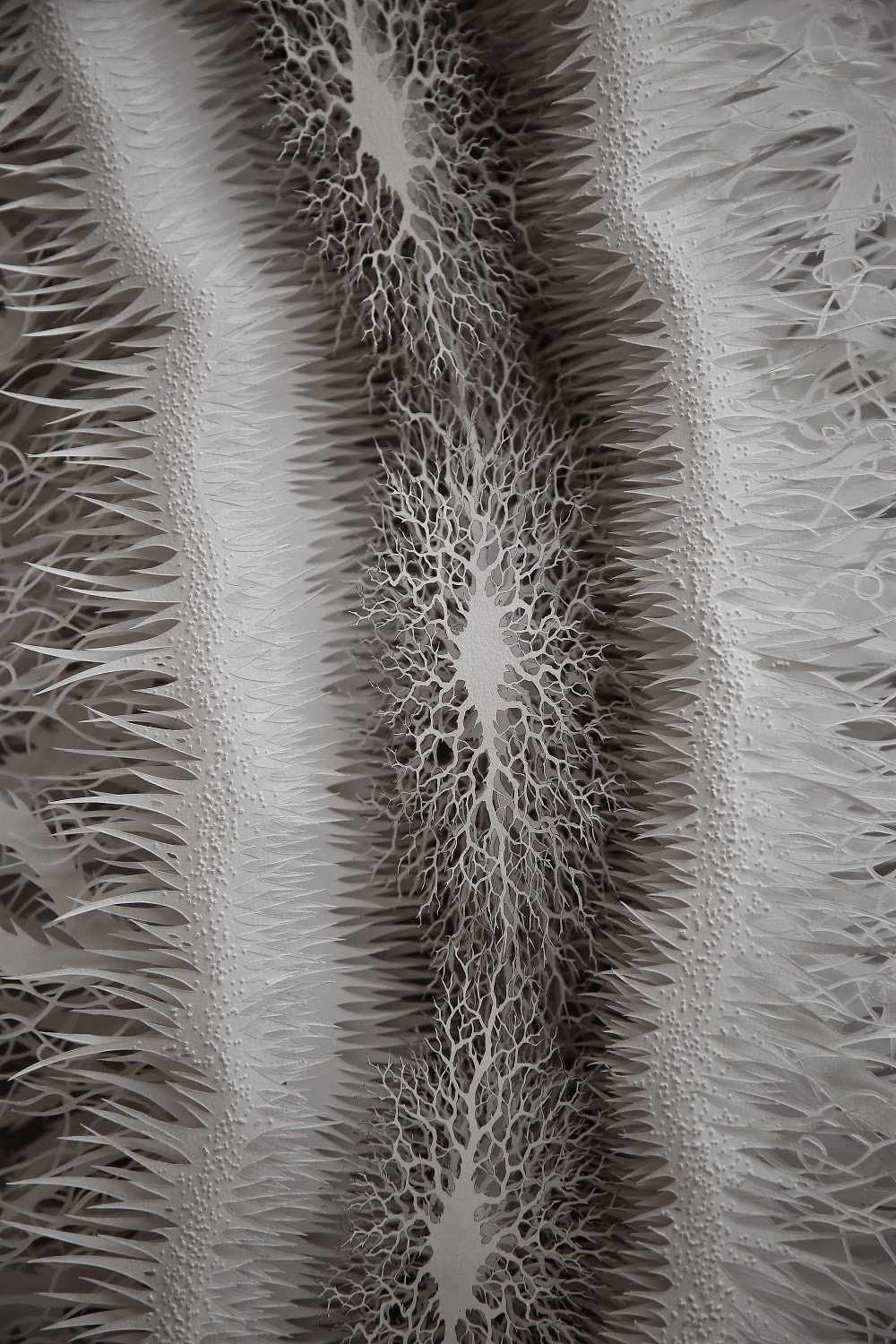 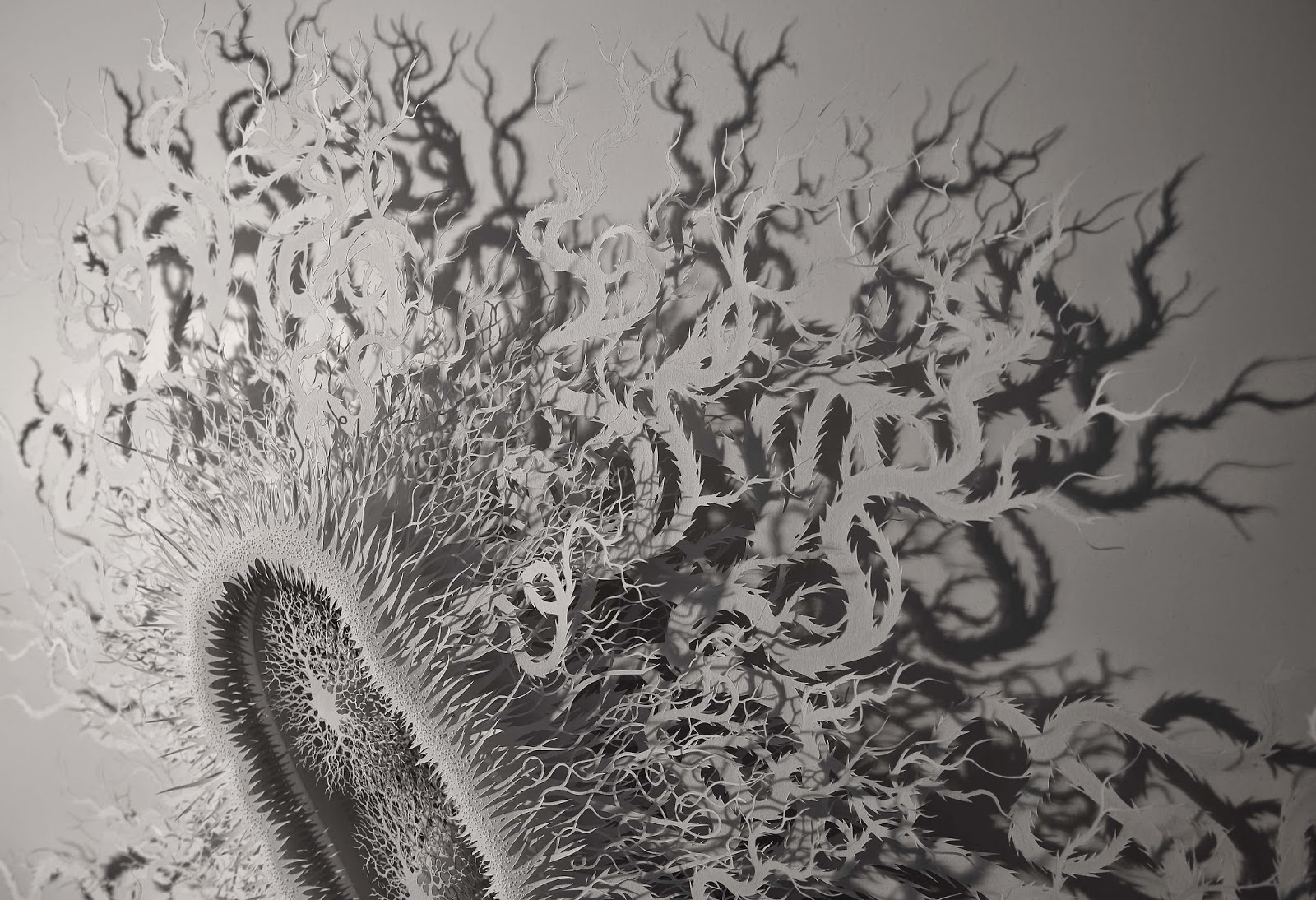 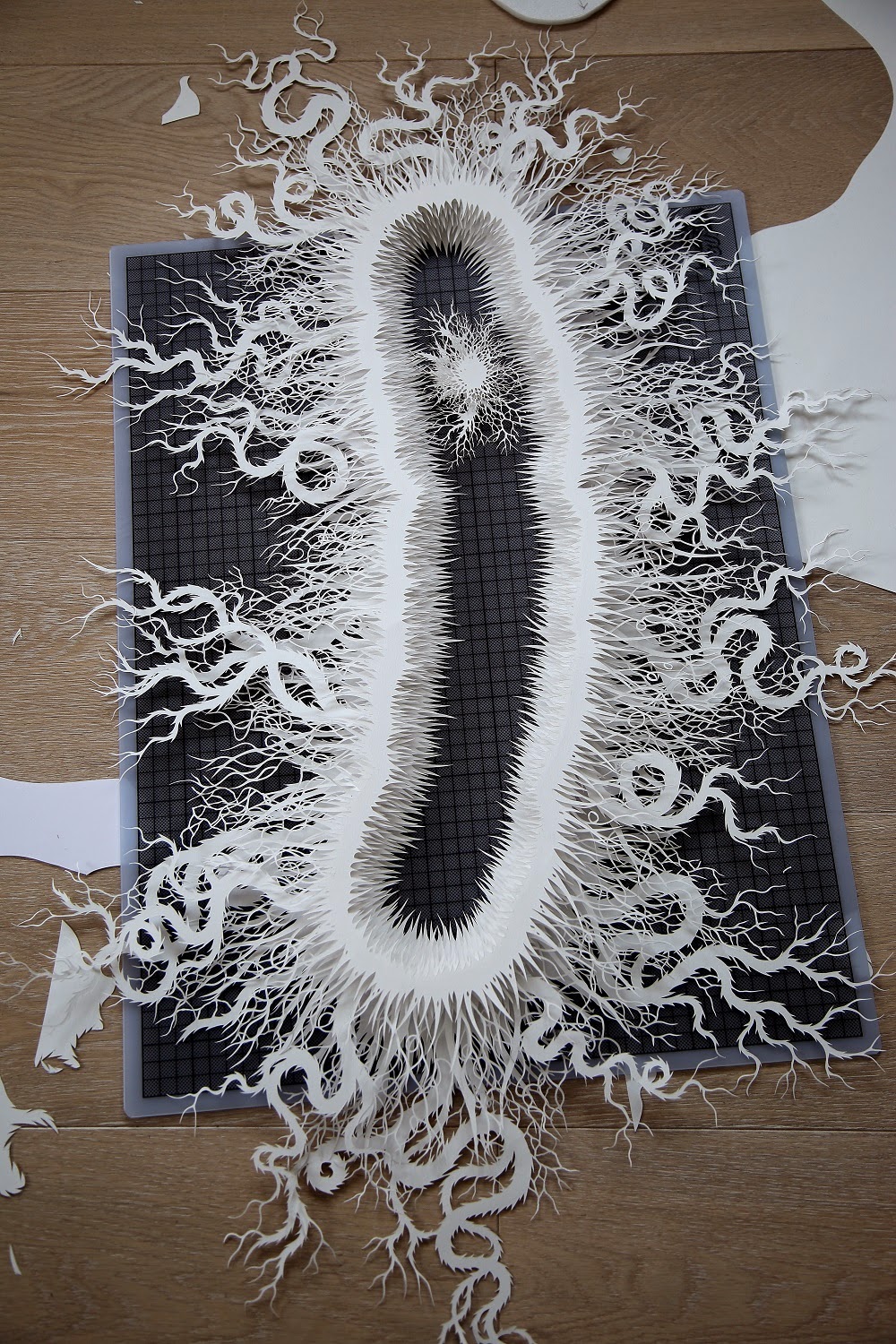 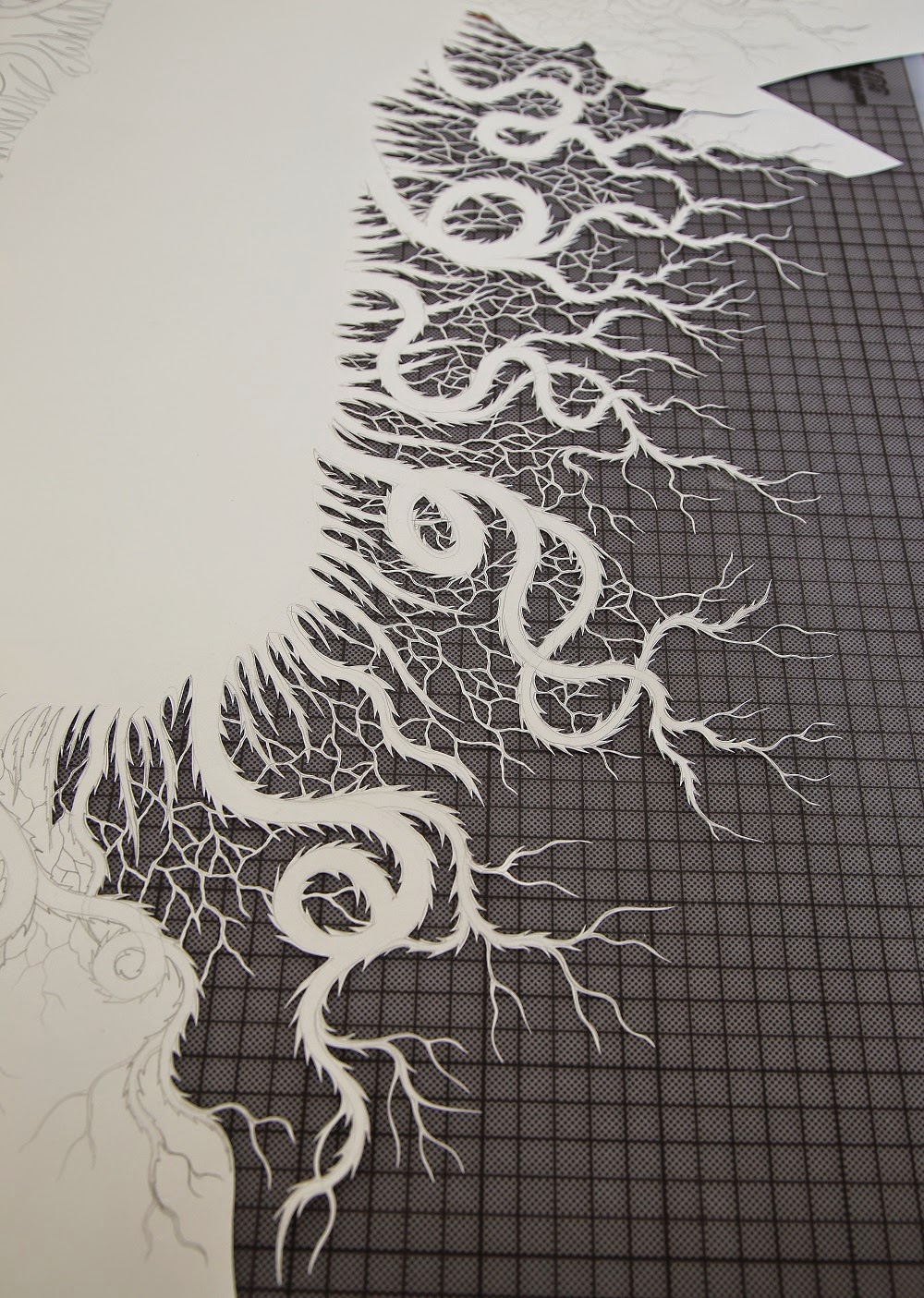 This piece explores the microbiological sublime : that rarely glimpsed world of cells, microbes, funghi, pathogens and neurons that make up our bodies in numbers and on a scale of which we can barely conceive. 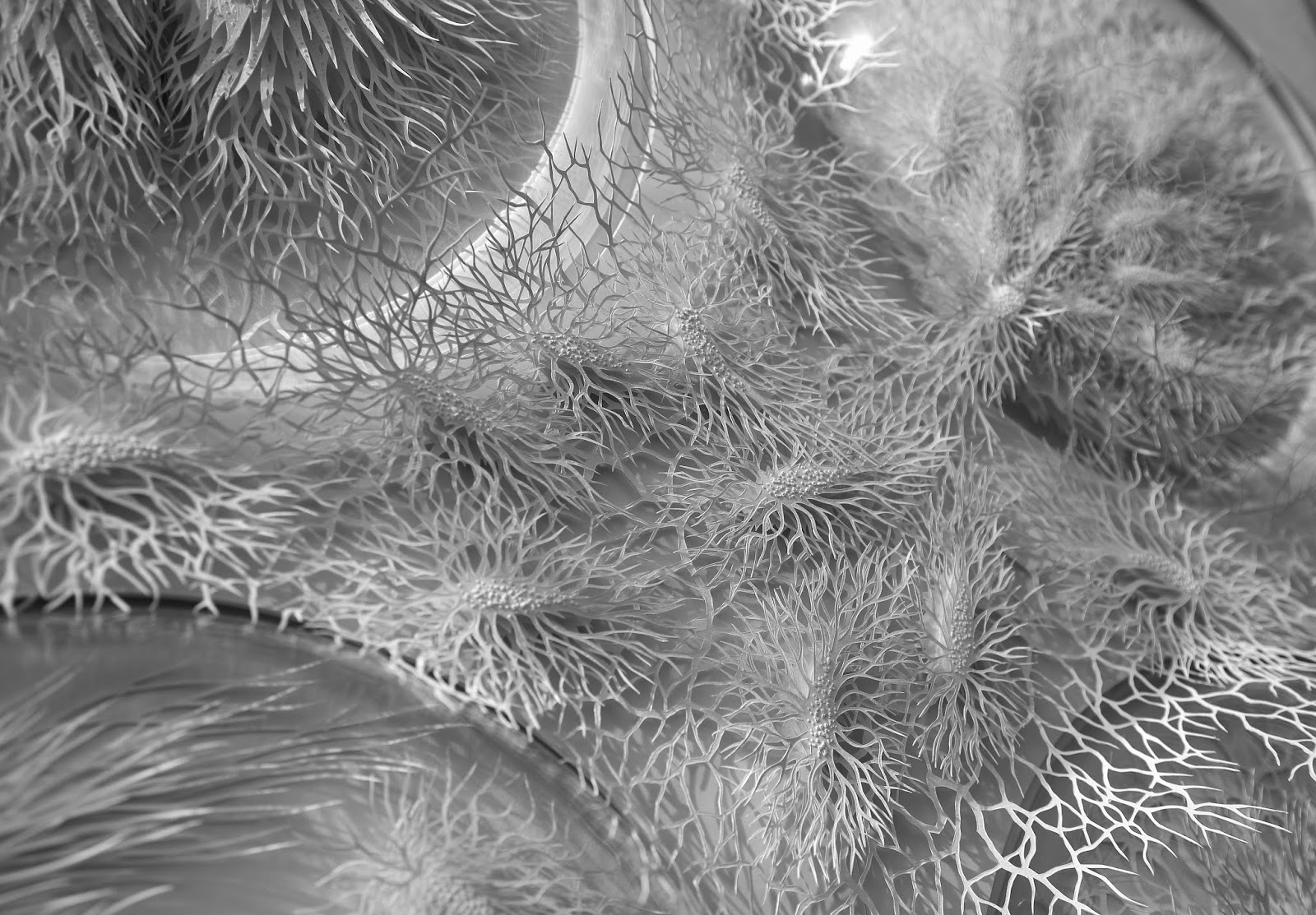 It is a world explored almost uniquely by scientists, the world of the electron microscope, the scanner and the petri dish: the world of the expert and the specialist. They guard their secrets and their knowledge carefully; the layman, the public, you and me, are excluded. 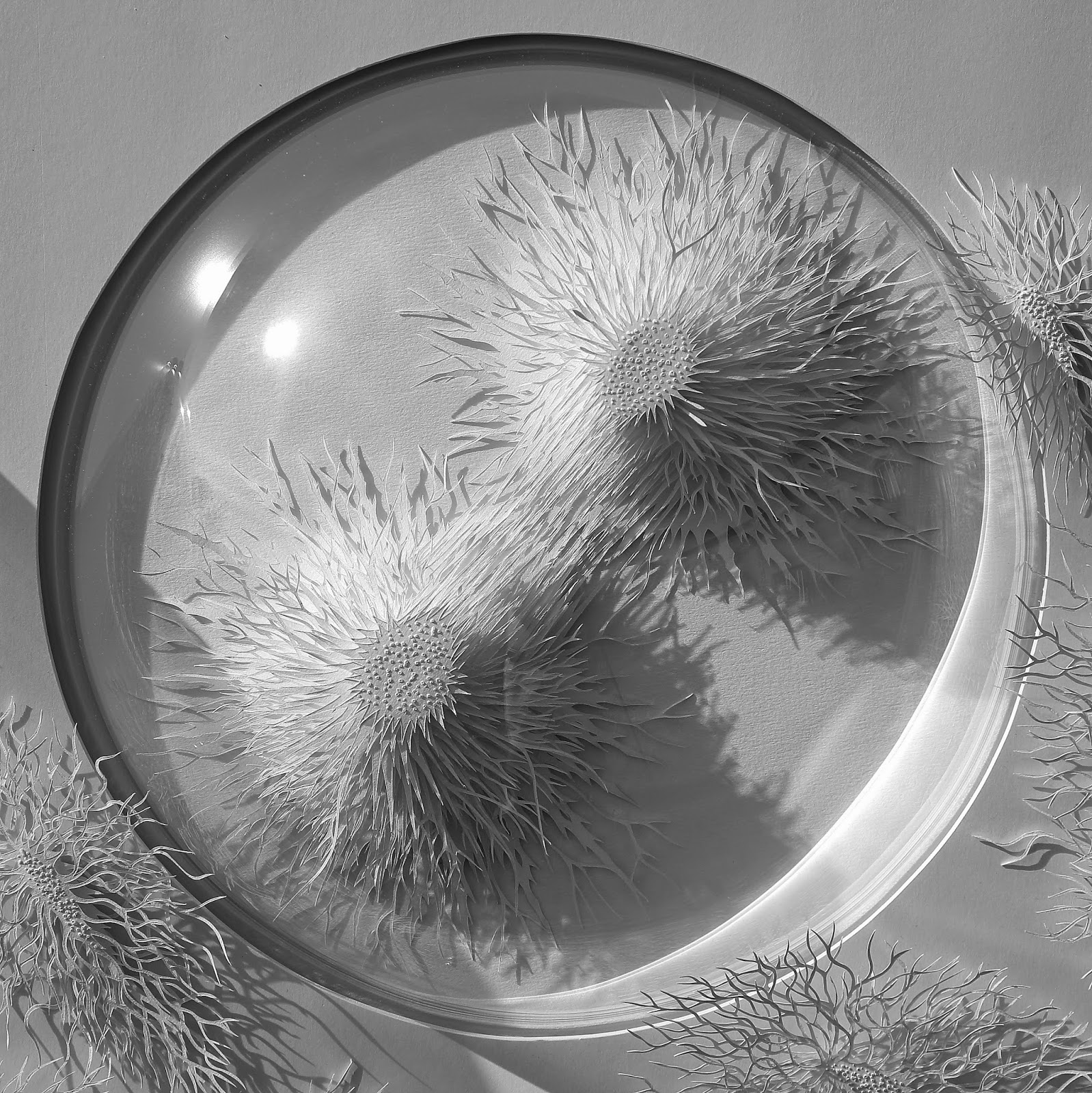 But we can see, we have eyes, even if our vision is limited and to a certain extent invalidated by lack of technical knowledge. We see this strange, exotic, beautiful world and are filled with both wonder and fear. Fear of the otherness of our own selves, fear of the incomprehensible, unimaginable scale, not of what is around us but what is inside us, indeed what is us. 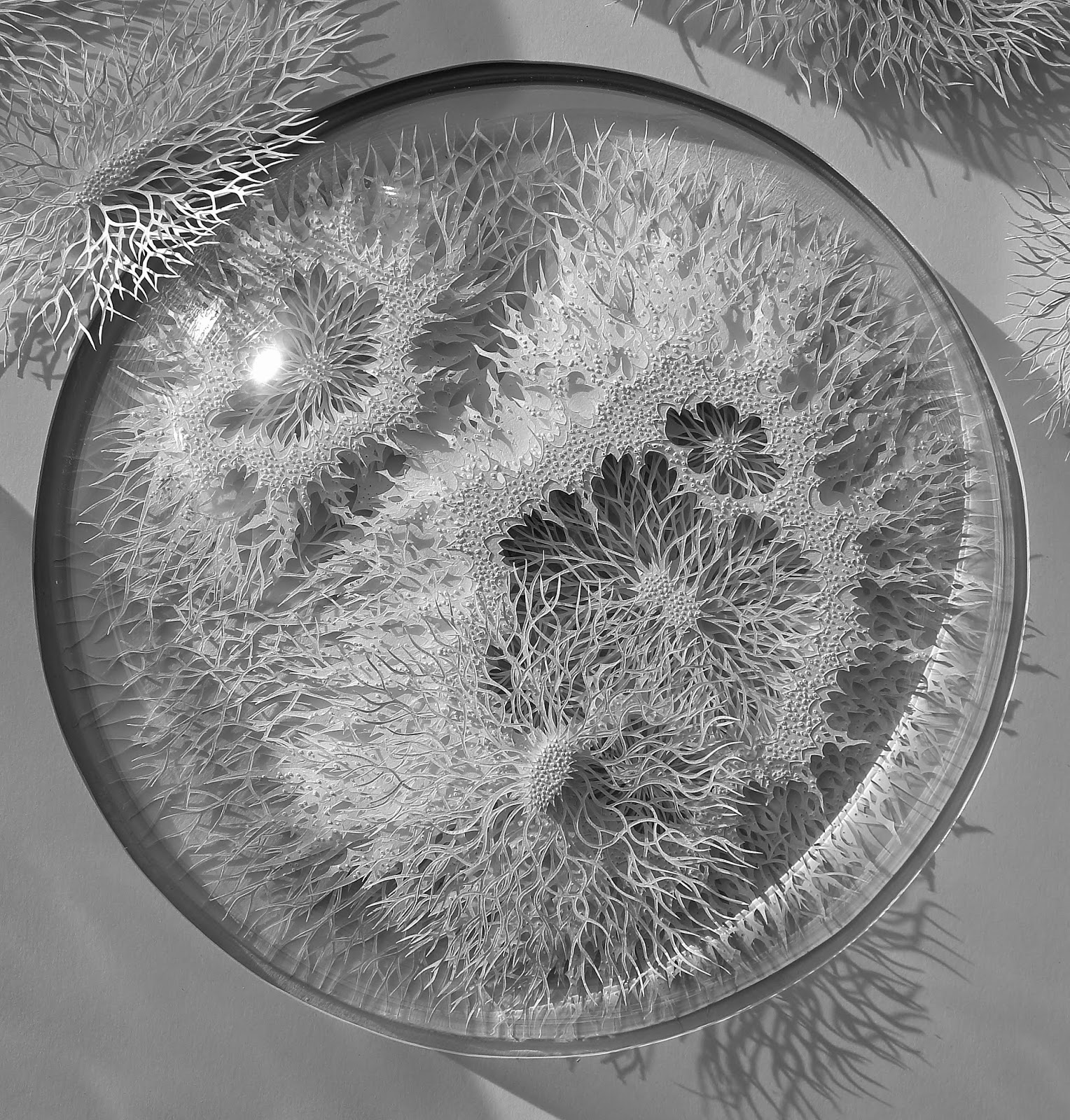 “Outbreak” is an imagined representation of the human body at its smallest scale; eight sculptures painstakingly hand cut from layers of humble paper, one delicate organic material used to describe another. It was inspired by a seminar I attended with a group of scientists researching the bacteria that colonises the human body, otherwise known as the Human Biome. My objective was to create a piece that showcases the beauty of the bacterial world in order to modify our negative perception of bacteria, as the overwhelming majority of the microbes that inhabit us are beneficial, helping our bodies to function by breaking down food, extracting vitamins and fighting illnesses. 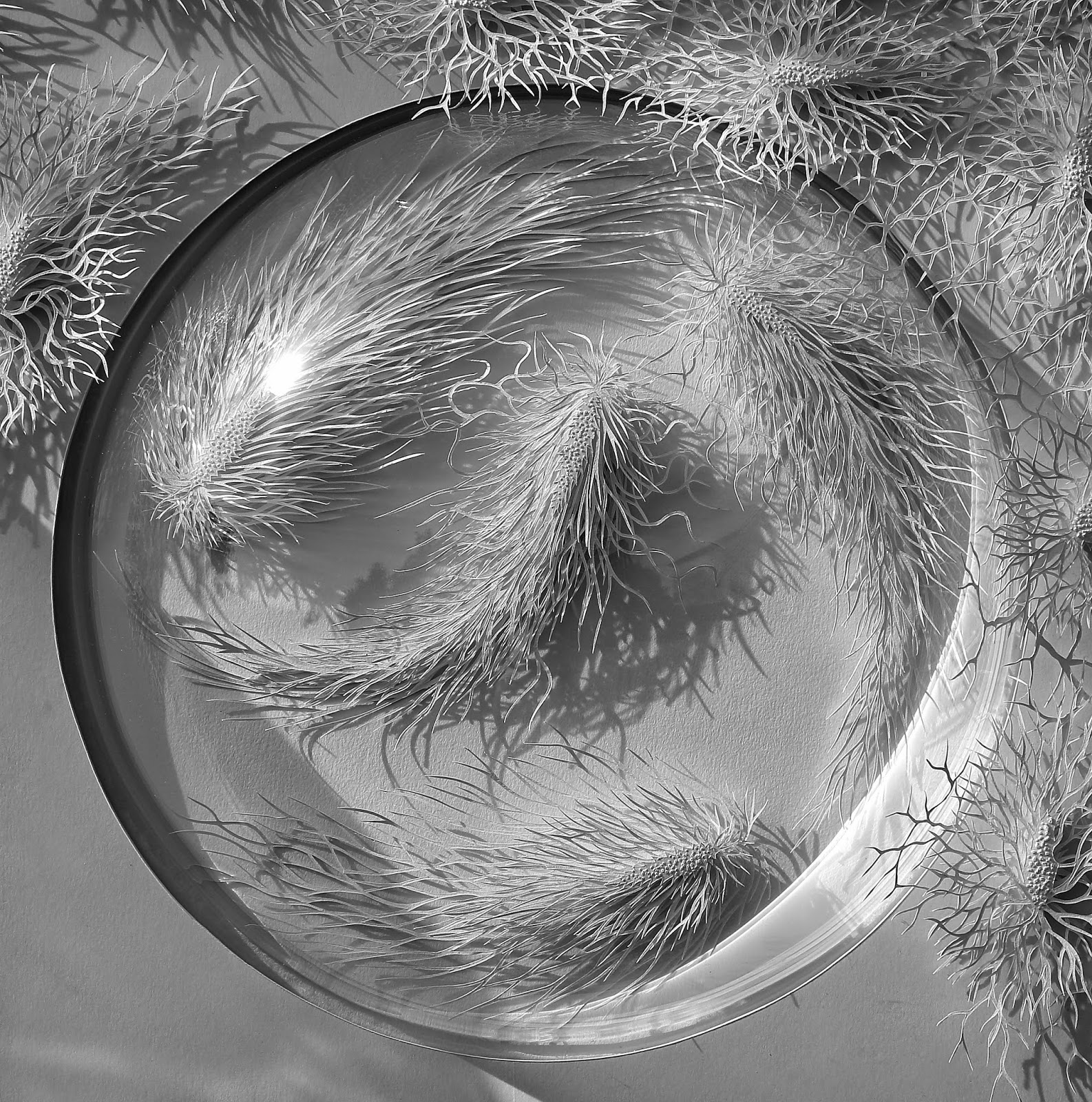 I was also struck during this meeting by how little science knows about this cutting edge field of research; for the moment scientists are merely trying to identify what varieties of bacteria there are in our bodies. The limitations of science, dwarfed by the sheer scale and power of nature (the human body comprises 30 000 genes but we carry 4 million bacterial genes) is figured in the sculpture by the break out of bacterial forms from one of the domes. Our attempts to control, define and master nature are shown to be limited. 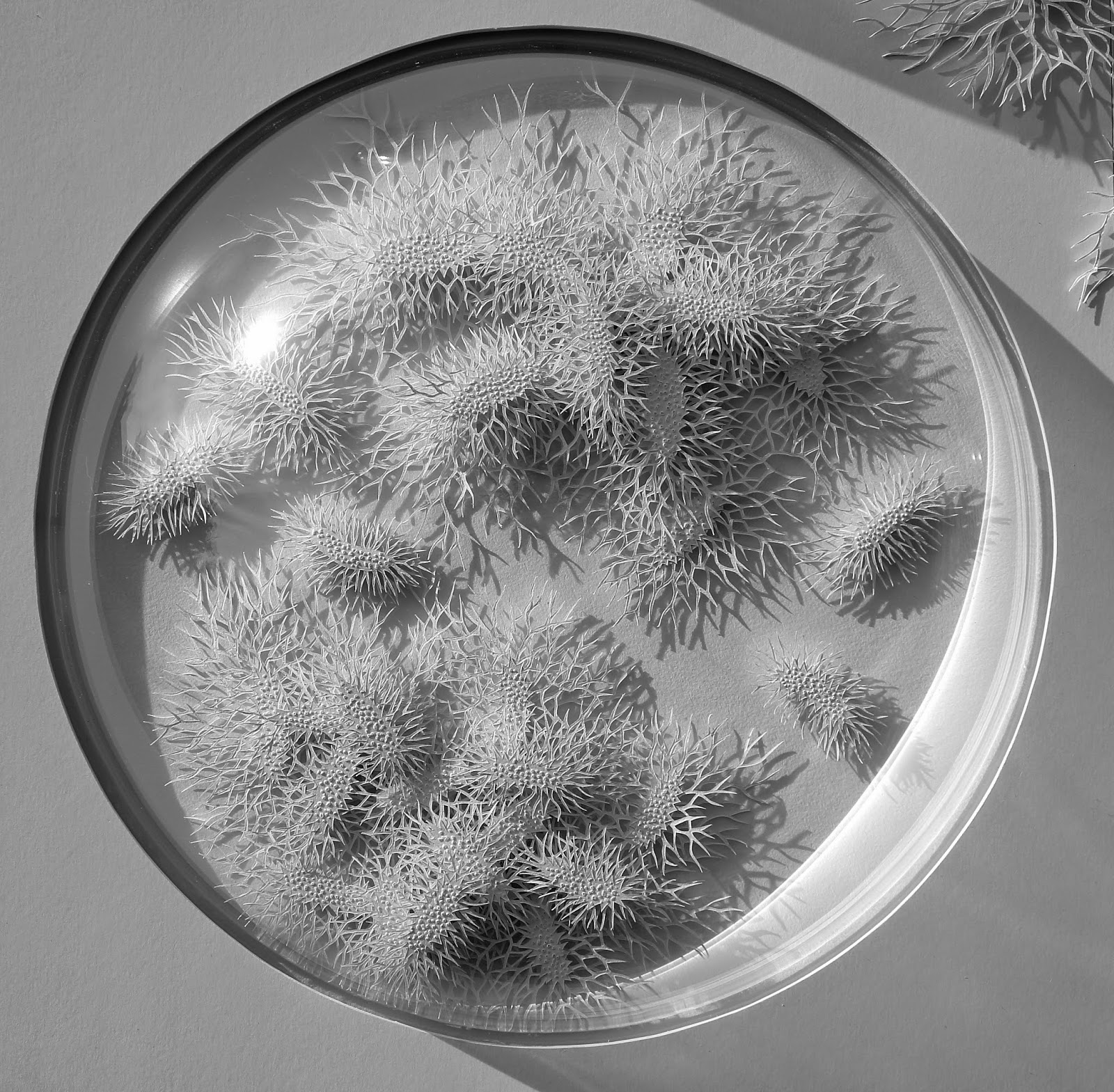 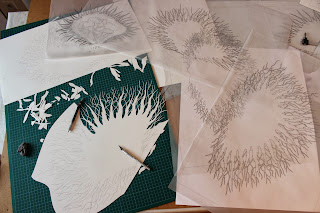 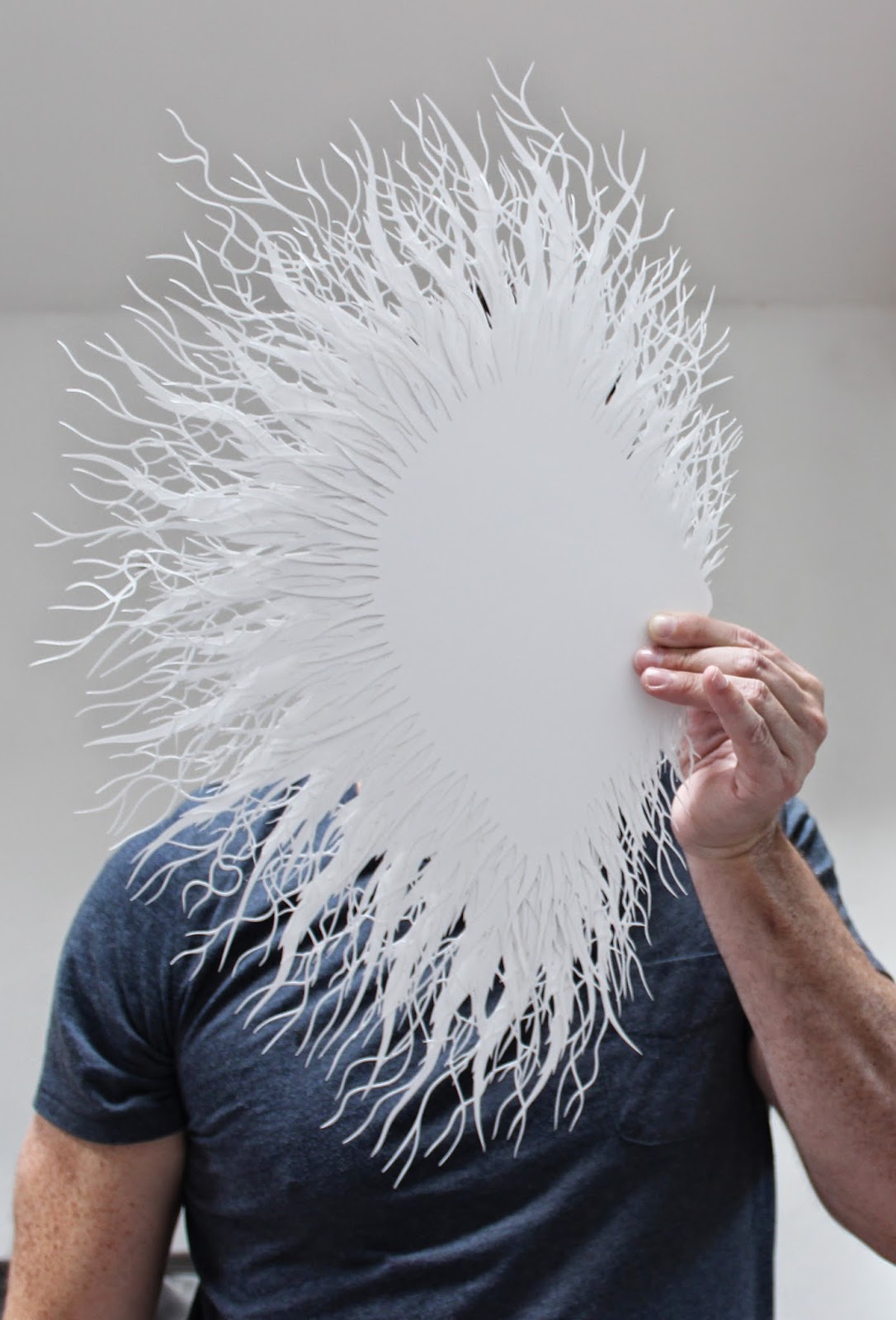 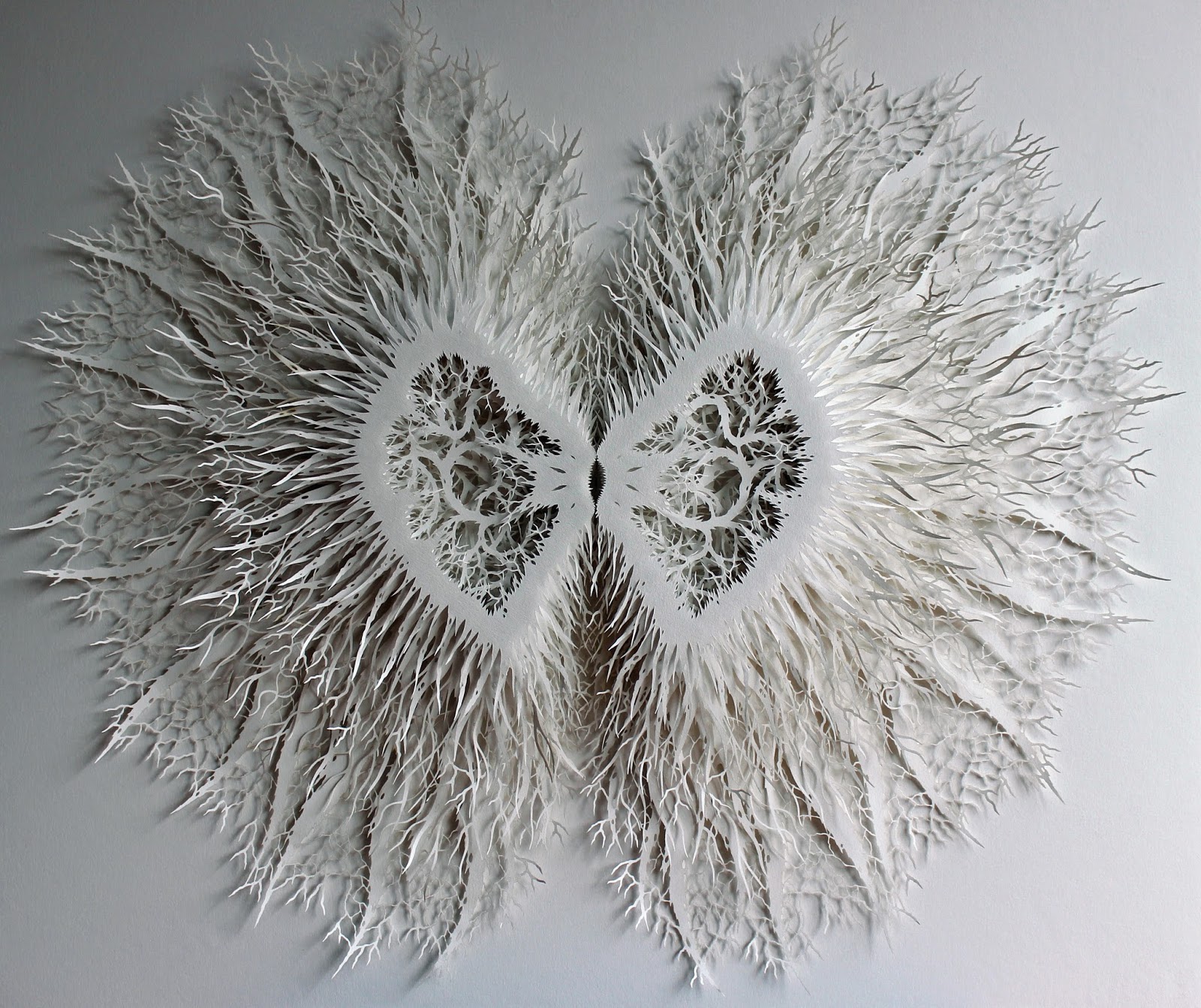 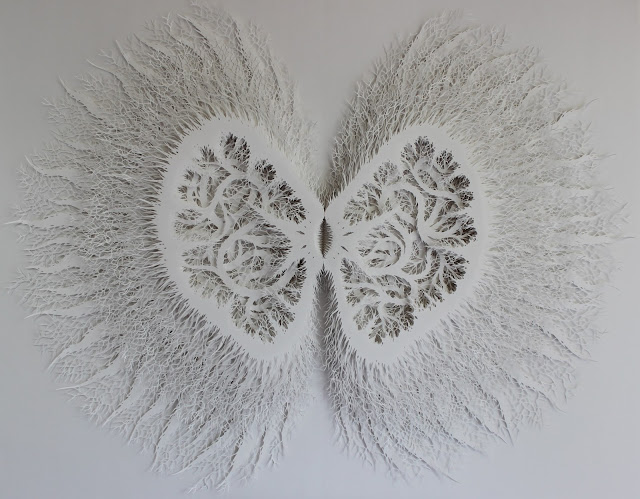 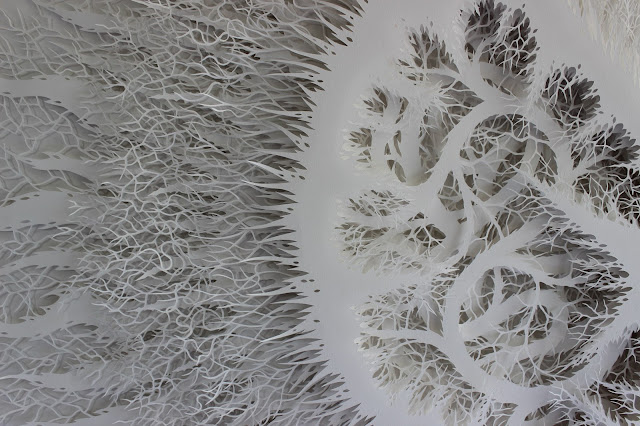 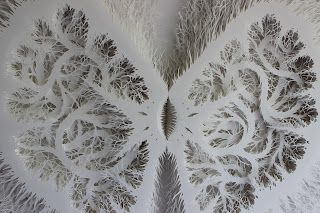 
At last a new work, five months in the making and on a more ambitious scale then my previous pieces. The idea was first conceived in September 2012 just as the summer was drawing to a close and the flowers were beginning to wither and reveal their autumn seed pods. What curious capsules of new life these varied pods are; they caught my imagination and I started to play around with the idea of The Pod.

As is usual in my creative practice this sculpture grew slowly and gradually, each layer succeeding the other more by intuition than design, the work growing organically. I wanted to create something vegetal but not floral. Above all I wanted to avoid the tweeness/cuteness of cut paper flowers and all the whimsical sentimentality they imply. For me nature is not sentimental or picturesque, it is rather the Kantian sublime, beautiful and terrifying. Seed pods often protect their precious cargo with spikes and thorns and I wanted to make reference to this aspect of nature. It is present too in that other source of inspiration for my work  the microscopic imagery of cellular forms, particularly, in this case, images of bacteria and virus cells that are also, in their dark way, seed carriers.
Finally, in contrast to this beautiful, brittle spikiness I wanted to introduce a more sensual, sexual quality, think Venus Flytrap or Georgia O'Keefe paintings. 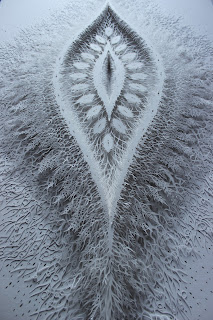 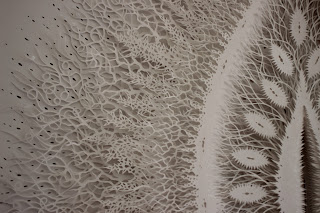 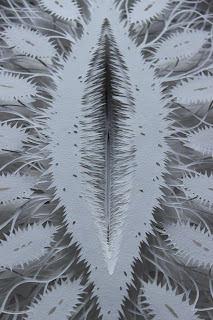